The concept of resistance has been a topic of interest, being used in political discourses and everyday language in relation to the environment and sustainability, the economy, political action, culture and art, as well as several other areas of society. Moreover, since the beginning of the pandemic of COVID-19, the use of the concept of resistance has also intensified in media discourses. It is a concept widely applied and examined in the field of arts and in the field of social sciences and humanities. Peter Weiss wrote, between 1975 and 1981, the book entitled The Aesthetics of Resistance, in which he rightly discussed the relationship between politics and art. If we think of various counter-cultural and subcultural movements, such as the punk movement or even performance art, we soon realize the relevance of this concept. In fact, resistance has been associated with representative and direct democracy, being used in the context of the party system and in several activist and even artivist practices in the field of feminism, the right to the city, in the climate and anti-racist struggles and in the emerging decolonial processes. In our assertion, the concept of resistance is interconnected with several, if not all dimensions of social life, anchoring itself in individual and collective daily lives. Associated to the dimension of resistance we often find the experience of precarious social conditions. Precariousness, similarly understood in a multidimensional version, referring to multiple spheres of social life, is assumed as a condition of the contemporary subject, affecting different social groups in different ways. Labour and housing precariousness, the insecurity of social and affective relationships, mark existences, lifestyles and identities. It is in this interstice that we frame this Call of the COMbART 2023 Conference, that is, in the desire to understand how the concept of resistance(s) can be conceived in contemporaneity. We thus argue that the conceptualization of the concept of resistance depends on multiple theoretical and empirical understandings, as well as on the subjectivities of the researchers and the objects of study.

The COMbART conference has been constituted, over the last years, as a forum for discussion around creative and artistic engaged practices. We understand that art, culture, as well as a set of other creative practices that do not fall into these categories, may constitute themselves as expressive fields with a relevant role in the way citizenship is built in contemporary times.

The fourth COMbART international conference is the result of a consortium of different entities. The organization involves the Interdisciplinary Centre for Social Sciences (CICS.NOVA), the Institute of Art History (IHA) and the Institute of Communication (ICNOVA) of NOVA FCSH and the Institute of Sociology of the University of Porto. Other partners of this event are the Portuguese-Brazilian Network All the Arts (TAA) and the Portuguese-Brazilian Research Network in Arts and Urban Interventions (RAIU). Our aim is to bring together a diversified set of knowledge, disciplines and arts, opening the submission of proposals to researchers from areas such as sociology, anthropology, history, art history, cultural and creative industries, cultural economy, cultural and social geography, urban planning, cultural studies, communication sciences and related disciplines, such as illustration, music, performance, film, visual and performing arts and new technologies. 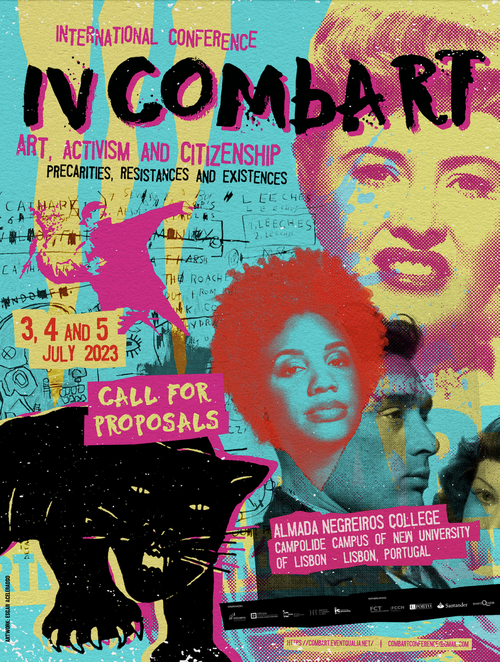