In their multiple facets, culture and the arts are a reflection of the times. They give expression to the way in which we understand and place ourselves in the world. But they also extend beyond that, playing a central role in the way in which we conceive of new realities, utopias, and revolutions. History provides us with an abundance of examples of art movements and artists that have articulated a flow between aesthetic creation, political struggles, and social change. The dimension of creativity, of intervention and art, as fields of social and political expression, are becoming increasingly important as a focus of critical thinking, resistance, antagonism, and alternative against the traditional political system and what it represents. Consequently, when we associate arts and culture to utopias, is possible to foresee desirable and desired alternative experiences.

Present times are a particularly critical period, where the arts can play a central role. We live in times of expanding extremism and populism and where the political system is the target of generalized suspicion. There are several authors referring us about the risks of this late modernity and their dystopias. At the same time, we are living times of collapse of ecosystems and a questioning of an old economic order: which is causing profound social and ecological ruptures, something that have been showcased in the Anthropocene: the sixth extinction. New voices are being heard in this new critical context, but also new grammars of political, technological, environmental, and spiritual action centered around an array of diverse causes such as human rights, gender equality, fight against racism, environmental crisis, among others. In different geographical, social, and cultural contexts we saw a rising dynamism emerging from minority, alternative, subaltern or stigmatized social milieus, which promotes a growing visibility and participation in the public sphere. Music, literature, street art, performance, the body, photography, the plastic or digital arts are, among several others, resources and languages employed creatively for citizen participation.

By this way, the intertwining between art and activism is established as an indelible expression of citizenship and participation in the public sphere, not only due to the authenticity of the creative and the artistic act, but also on account of its ability to push to the fore of public discussion new questions, generating renewed discourses in the political field, allowing simultaneously, the design of new utopias, new ways outs for the crisis and futures of hope.

The third edition of COMbART conferences aims, precisely, to amplify and give continuity to the reflections that have been developed in previous editions, fostering discussions about the ways in which “combat arts” can be involved in the way we imagine possible futures. Thinking about a credible future, this third edition will focus on “utopias” and “imagined futures”. With this thematic, we intent to place the idea and conception of utopia at the center of social sciences, arts, and humanities debate, as well as to highlight methodologies funded on arts-based research. The threats to our planet arising from climate change, ecosystems extinction, the pandemic, social inequalities, political and economic crisis, unfailingly imply a reconfiguration of practices, modes of action and imaginaries, that allow to think possible futures beyond the capitalist, extractivist, colonial and Eurocentric model. Thus, conceptualization about utopias and anti-utopias, the critical dystopias, and the Anthropocene, are drivers to evaluate new relations between social actors, nature, cities, arts, culture, economic system and technologies, contributing to possible social change and, subsequently giving rise to emergent a(r)ctivism ways.

The third international conference COMBART: Art, activism and citizenship is the result of a consortium made up of different entities. The organization involves the CICSNova of the New University of Lisbon, the Institute of Social Sciences of the University of Lisbon, and the Sociology Institute of the University of Porto. This partnership also involves the Luso-Brazilian All-Arts Network (TAA), the Luso-Brazilian Research Network in Arts and Urban Interventions (RAIU). The conference aims to bring together a diversified set of knowledge, disciplines and arts, so that the presentation of proposals is open to researchers from areas such as sociology, anthropology, history, art history, cultural economics, cultural and social geography, urban planning, cultural studies, communication and related disciplines such as design, illustration, music, performance, film, visual and performing arts and new technologies. 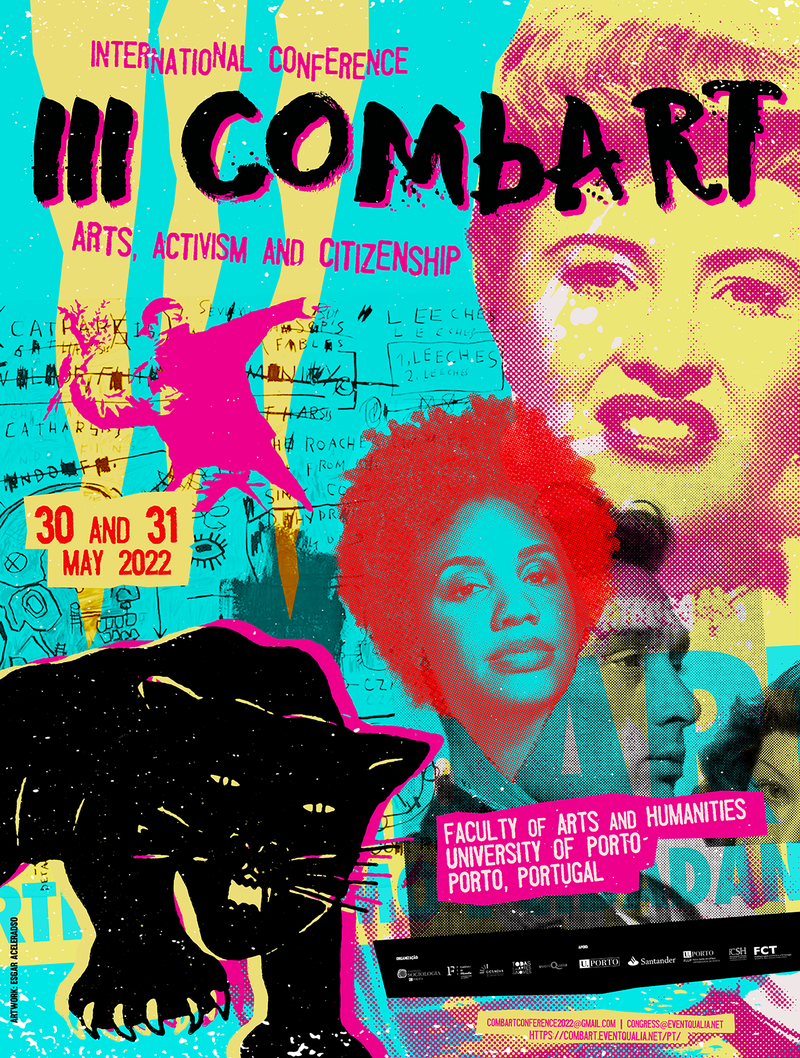